This is a post that I intended to put up on August 17, but was in my Verizon data unlimited but dead period.

As I have mentioned in previous posts, I spent 6 weeks in Canada this summer. I coordinated the end of my visit to coincide with “Rendez-Vous 2017” which is this year’s version of the “parade of the tall ships” that occurs on various years. They were scheduled to visit Annapolis Royal on August 16. The tall ships are a collection of   antique wooden sailing ships (or authentic recreations of them) of centuries gone bye. They come from all over the world to give people a look at what sailing was like for our ancestors. This year they were visiting various ports on Canada’s east coast in celebration of Canada’s 150th birthday. I wanted to see them when they were scheduled to be in Annapolis Royal, Nova Scotia (my birth place). The schedule was well publicized, see this link:

Donna and I staked out what we thought was the perfect spot for viewing; where the boardwalk meets the town wharf. We sat in the sun for two hours to ensure no one took “our spot”. The whole thing turned out to be a huge disappointment! All we got to see was some sails on the horizon. All the local dignitaries plus a Scottish dragoon guard were on the wharf ready to officially welcome them. The town mayor and other government dignitaries gave speeches. The Scottish guards; in full period dress and using period muskets gave a 21 gun salute. We assumed we were positioned for some really good close up pictures. However, they sailed toward the wharf, then lowered sails out in the basin. 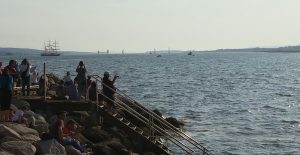 Then raised sail, turned and sailed away. 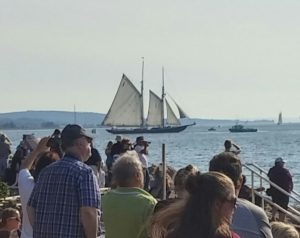 No explanation why they didn’t dock. No one seemed to know why. There was a bit of an on-shore wind, and the tide was not quite at full tide. Those could have been factors, but no-one seemed to know. The pictures I got were all from a distance an mostly of the departure. I expected this to be the high point of my Canadian trip, but it his was definitely the low point.

I was in Digby the night before for a family birthday celebration.  The tall ships were docked and there were large crowds lined up for tours aboard them. I snapped a picture from a distance and figured why buck the crowds, I will get lots of close ups tomorrow in Annapolis Royal.  Boy was I wrong.

I did, at least get a close up of the Scottish Guard (portrayed by members of the local Sea Cadets as they were preparing to march to the town wharf for the welcoming ceremonies. They put on a much better show than the tall ships did. 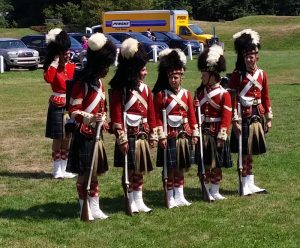