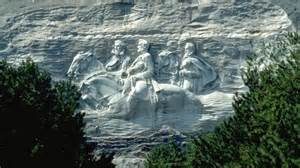 I feel compelled to comment on the current rhetoric surrounding the destruction of monuments associated with the American Civil War. First I must state that I was born in Canada and therefore have no family history or direct emotional involvement in the issue. The details of the civil war was something that I only became aware of after I moved to Georgia. In high school in Canada it was just a paragraph in the history books.

A lot of towns and cities around Georgia and other southern states have statues and monuments that were erected after the civil war ended and that commemorate certain historicist events and people associated with the war. Having been erected by southerners, they commemorate historic events associated with the Confederate States’ view of the war. The protesters claim that they are offensive because they were erected for the sole purpose of glorifying slavery in the US, and therefore must be removed. They further claim that their existence is a divisive factor in our current society.

Certainly slavery was a horrible thing and no human being should ever be a slave to another human being. I don’t think any sane person would deny this. However it did happen! It has not existed in the US for 150 years. All the people who were part of it (both slave and master) are long since dead. It is part of our history. Simply destroying statues and monuments will not change history one little bit. We need to remember the horrible things that happened in history to remind us to never do them again. Of course this part of our history is offensive but defacing stature and tearing down monuments does not change that one bit. However, removing these items is a very divisive move for todays society.

The civil war was the bloodiest war the US has ever been involved in. 622,000 soldiers lost their lives. That is a horrifying tragedy as well. We can not just sweep it under the rug. Both sides of the war should be ashamed of this statistic. A civilized country corrects civil injustices and inhumanity by the force of law and forceful negotiation and leadership, not by slaughtering a major portion of it citizens.

Seems to me that, with that many dead soldiers, their descendants deserve to be given the freedom to mourn them, on both sides of the conflict. Why is there talk of destroying the graves of Confederate soldiers? They already received the ultimate punishment, their lives were ended. They are not promoting slavery any more!

For the purposes of my own education, I did try and research a time line of the ending of slavery in the US and this is what I found:

by 1804 All the northern states had ended slavery, but ownership remained legal in all the Southern states.

January 1, 1808 US Law passed abolishing transatlantic slave trade. Britain passed a comparable law at the same time. The law did not change the law regarding ownership of slaves; it just made importation from abroad a crime.

April 12, 1861 The American civil war began when the Confederates bombarded Union soldiers at Fort Sumter, South Carolina. There were many reasons why the Confederates wanted to secede from the union. They were based on states rights and economic disparity, but certainly the right to own slaves was an integral part of it.

September 22, 1862 Abraham Lincoln issued a preliminary Emancipation Proclamation declaring all slaves free in the rebellious southern states as of January 1, 1863. Up until September 1862, the main focus of the war had been to preserve the Union. With the issuance of the Emancipation Proclamation freedom for slaves now became a legitimate war aim.

December 6th, 1865 The 13th Amendment, which abolished slavery in the United States, was passed.

It appears to me, as an outsider, that the process of abolishing slavery in the US was a multi step process of which the civil war was one of those steps, not the only step. In fact, from a legal standpoint, slavery ended with the Emancipation Proclamation, two years before the end of the civil war. Yet the war went on. So why is the memory of the war the only part of the process that people are attacking?

Sadly, throughout history mankind has committed horrible acts of brutality against other humans. Slavery existed in a number of historic cultures. One instance of this was taught to us ever since Sunday School. The Egyptians kept the Israelites enslaved for 400 years until Moses lead them out of Egypt to the promised land. We believe things like the pyramids were built with slave labor. Why aren’t the same protesters that are demanding destruction of cavil war monuments demanding that Egypt tear down the pyramids since they are a symbol of a society that practiced slavery. The list of historic cultures that kept slaves is a long on. We believe the Aztecs in South America kept slaves. It has been said that at the time that Europeans were bringing African slaves to America, there were African tribes that waged wars on neighboring tribes for the purpose of capturing slaves.

People have been cruel all throughout history, why create more division in this country by attacking inanimate stone objects in the name of erasing history? It won’t accomplish anything except increase the anger in the world. Slavery happened, you can not change that, let’s direct our energy toward ensuring it never happens in the future.

I do not mean to offend anyone with my comments; as an outsider, I am trying to find the logic behind the protests. So far I have not found it. I welcome enlightenment.