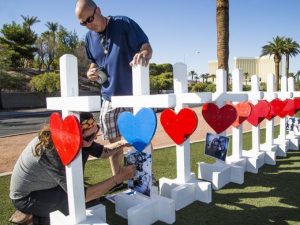 The recent massacre in Las Vegas horrified me, and the entire nation. Another reminder of what a violent society we are becoming. Following this tragedy come the inevitable media hysteria calling for the banning of guns and/or Slide Fire devices. Yet another example of the absence of logic and clear thinking in our society.

Normal people do not kill their fellow human beings. Only mad, deranged, mentally unbalanced people kill other people. If I may quote the opening line from the 1930s radio show “Who knows what evil lurks in the hearts of men? The Shadow knows!”. How do you legislate away “the evil that lurks in the hearts of men”? Passing laws against inanimate objects will not have any affect on it.

We are becoming an ever increasing violent society. The reasons are complex and no one really knows the details of why. I believe several factors are involved, Factors such as:
(1) Population growth leading to higher population densities. Some studies have been done suggesting a link between population density and aggressive behavior. Here are a couple of references:
http://www.sascv.org/ijcjs/harries.html
http://www.ncsociology.org/crowding.htm
Compounding the population growth is the trend for higher percentages of the population to concentrate in urban vs rural areas increasing urban population densities even more.
(2) The decline of the nuclear family unit; a father, mother, and children living together and working together as a unit. Including such simple things as eating meals together, enjoying recreational activities together, etc.
(3) The absence of discipline in the public school system. Also overcrowding in the public school system.
(4) The growing amount of violence in in the public entertainment systems.
(5) The prevalence of violent behavior and lawlessness among role models such as professional sports figures, and other bad behavior.
(6) The popularity of bullying in our schools and on social media.
(7) The trend for the news media to only report sensationalism and violence, giving the public a distorted view of what the new normal is like in our society.
(8) The sad example that our elected officials set implying that leadership can only be accomplished but confrontation and personal attacks. Solving political issues via logic, rational debate, and consensus negotiation is a relic of bygone ages.
(9) The decline in faith based disciplines. Church membership is declining in all denominations. Most people no longer hear the messages of love, tolerance, and forgiveness taught by all major religions.
(10) The ever increasing level of violence used by law enforcement personal in enforcing the laws of the land.
And the list goes on and on. The average person can still remain a civilized person in spite of all this social pressure to the contrary. However, a small percentage of the population cracks under under all this pressure and reacts violently against society.

How do you counteract all this pressure in modern day society? Sadly, no-one has figured that out yet. I sure do not have the answer. However, logic dictates that passing laws against inanimate objects will have no positive affect on any of these issues.

Because politicians do not know how to solve the problem of violence in our society (let’s face it, it is a really hard problem to attack), and because the public demands that our government fix the problem, they take the easy way out. It is easy to blame the gun, or the stock, or the silencer, for the violence. You can quickly pass a law against a piece of metal then brag to the public that you took action to fix the problem. But, the violence goes on. Hopefully by the time the public has realized that you accomplished nothing, the lawmaker will have won re-election.