Although I had reservations, on November 2 2015, I finally took the plunge and upgraded my laptop from Windows 8.1 to Windows 10. This was my first attempt to like Windows 10. The upgrade went well but everything went down hill from there. As has been well publicized, Windows 10 is riddled with spy ware. Microsoft demands access to all that you do on your computer. They collect all sorts of info about you and use that info to force advertisements on you. Heck, you can not even play simple games like solitaire without signing up for a Microsoft account, giving them access to your game playing habits. In my experience Windows 10 has had problems with the print spooler since day one, and they still pop up occasionally. Other issues such as disappointing Start menu have cropped up over time since Windows 10 rolled out. The most heinous “feature” in Windows 10 (home edition) is the automatic update feature. Unlike other operating systems, there is no longer an option for the user to schedule when the system does an update; and Microsoft does a lot of them. I should note that Windows 10 Pro version apparently does have a feature to control update behavior; but I am not about to pay extra (list price $199) for it just to get that one “feature”. It is much cheaper to just change operating systems. Also, because Microsoft requires constant monitoring of your computing activity, there is not much you can do with Windows 10 unless you have a full time Internet connection active.

It has taken Microsoft years to perfect the Windows OS to be a solid and user friendly platform. Finally they got it right with Windows 7. It has been downhill ever since. The philosophy at Microsoft seems to be that the millennial generation grew up with smart phones and they are very comfortable with that user paradigm. Therefore their direction with PC user interfaces is to make them work just like a smart phone interface, thus abandoning the traditional PC user (the person who wants the PC to be a productivity tool for serious work rather than as primarily a social media tool). This is probably good for their corporate growth into the next century, but it does abandon a whole generation of hard core PC users. I have nothing against smart phones; I have an Android based phone and I really like its capabilities. By the way, the Android OS is based on the Linux OS.

Another disturbing trend in the Windows world is the trend of major software providers to switch to the “software as a service model” which means you no longer buy a user license to a software package and are free to use it as long as you wish. Microsoft and other software vendors are selling software subscriptions that must be re-purchased every year or your software “self destructs”. As a retired person on a fixed income, I can not afford this pricing model.

Some PC die hards decided to just stick with Windows 7 indefinitely. In the typical Microsoft philosophy of total control of your PC they have made efforts to block that practice. First they stopped support of Windows 7 but no longer providing updates. Then, recently, they announced that they were working with PC manufactures to block installation of Windows 7 on newer PC hardware. If you want to run Windows 7 you must only do it on obsolete hardware. They do not want you buying a new PC that comes with Windows 10 pre-installed, and downgrading it to Windows 7 (which a lot of people were doing). 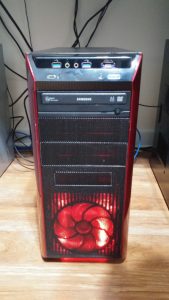 In light of all of the above, in early 2016 I abandoned Microsoft Windows entirely and switched my PC to a Linux operating system (OS). I have been totally happy with Linux and do not miss Windows. In the interest of full disclosure, I do keep my Windows laptop in the closet and I take it out once a year at tax time to do my income tax on Turbo Tax. Intuit do not publish a Linux version of Turbo Tax. This will probably not be an issue in the future since the trend in tax software seems to be toward Income Tax Return preparation totally on-line.

The picture at the left is the PC I built to run Linux on.

There are several versions of Linux available. I am using Linux Mint https://linuxmint.com/. The user interface is similar to Windows 7 and therefore there is not much of a learning curve. There are many advantages to Linux. First it is totally free to download and use. There is never any charge to use it because it is “open source” software released into the public domain. Also, virtually all the software that can run under the Linux OS is “open source” and therefore totally free. There is high quality software available for virtually every task you would want to do on a PC; complete office suites, Internet browsers, software development systems, video and audio editors, media players, and on and on. As mentioned above, the only software area that I have not found Linux software for is Income Tax preparation software.

I like my smart phone and I like my PC. But they are used in different paradigms. When I am out and about, the Android phone is a fantastic companion. When I sit down at my desk to compose a document, design a web page, edit some photos, etc., I want a ‘real” PC, not a smart phone. And I certainly do not want to be forced to have a full time Internet connection just to get some work done.