Big collage football game in Atlanta Georgia last night. SEC final with Georgia and Alabama playing. Sadly Georgia lost. President Trump even attended the game. However, football is not the topic of today’s 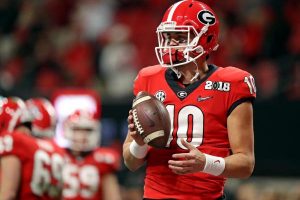 comments. As I watched the morning news on TV the day before the game, it emphasized how much society has changed in the last few years. When the US president attends any large function, security is heightened as we would expect. However, even before the presidential visit was known, the media was reporting the considerations for anyone attending the game.

The weather forecast was predicting a chance of rain, however no umbrellas allowed. No backpacks or cases of any kind. Anything that you did carry had to be in a clear plastic bag. Every person going into the stadium would be screened individually so expect long lines to get in. There would be bomb sniffing dogs everywhere inside and outside the stadium. Snipers would be on rooftops around the stadium. Police presence would be heavy, both uniformed and plain cloths. Traffic around the stadium would be severely restricted so you must walk to the stadium or take public transit. Remember, all this in the rain with no umbrellas allowed.

The point of this commentary is that all this talk of excessive security at a collage football game reminded me of how drastically different our lives are now, compared to a few years ago. The threat of attack by radical Islamic Terrorists and other madmen has severely altered personal freedoms. Any public place or event must be treated like an armed camp. Sporting events become military style operations. Never again will Americans be able to be free and enjoy recreational activities as they please. Other countries seem to have similar issues. When in a public place all your actions and behaviors must be modified so that you can prove that you are not a threat to others. Of course there is a cost to all this extra security, so now the simple act of living gets more expensive (we all indirectly pay for this extra security).

I certainly understand why all these things must be done. It will likely get even worse as time goes on. I really do not see any logical alternative. But it is still sad to see society go this way. Where will it go from here. All society housed in prison type camps under 24 hour armed guard for our own protection? So sad!